Note: This was originally created 6/21/05, posted on my other site, here. Obviously we now know what the controller looks like and does, but I figured I’d repost this here anyway. I still think someone should make a standalone box. Update: We now know that the Revolution has been officially named the Wii. 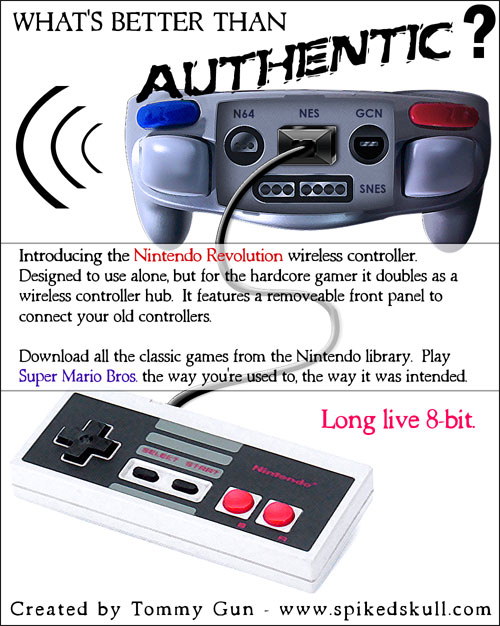 The design is to show off the concept of hooking old controllers into it, to use as a “wireless hub” type thing. The focus obviously isn’t on the actual Revolution game control. The idea is that the controller has enough buttons to work alone for all the old games, but the hardcore gamers can get the true experience of the old games by plugging in and using the original controllers. A lot of us still have our old systems and controllers, and if we don’t, you can buy the old controllers for like $1 at GameStop.

I added the “Red Z” just because I wanted to make it look a little different since I obviously modelled it after a GCN controller. Having two Z’s would be preferable for things like SNES games if you don’t have a real SNES controller. Plenty of other changes could also be made to make it more compatible with the old controller layouts. Again, not the focus of this design.

The reason the ports are built into the controller and not the system: It would be sort of a fake wireless system for old controllers. You would be able to switch controllers much easier this way (because the Rev. controller could be right next to you), and you could sit as far back as you wanted. The Rev. will obviously come with a controller, and you can add as many more as you want since they’re wireless. Otherwise they would have to build two (or more) of each port into the system! Also, the Rev. controller will be needed to jump back to the menu screen to select different games and whatnot. Of course I have no idea what that interface will be like, but you’ll need the Rev. controller for functions like that.

Someone said that the Revolution will have GCN ports built in, so that port isn’t needed…well if you want to play faux-wirelessly it would still have a function (since the wavebird doesn’t have vibration).

Everyone has been speculating what the controller could be, so I made this. Since the “revolutionary” part is supposed to be the controller, it will probably be way different than current controllers. In fact, maybe the GCN port will be so you can play the older games with the GCN controller, since the new controller will be radically different.

I highly doubt they’d build this into the controller, but I think this idea would be great as a stand-alone. Nintendo (or a third party) could make a wireless hub like this with maybe two of each ports on it. Then you could just set the box on your coffee table (or whatever) and have all your controllers plugged in.

CategoryArticles and Rants Photos and Images