“It’s only one string but I rock it.”

After playing Guitar Hero every other day for a couple weeks and failing at 98% on Bark at the Moon (Expert) I had just about given up, even though it was the only song I had left to pass in Career Mode (I only played BatM occassionally–it hurts). Well my friend from the Navy has been here on leave this month, so I got him addicted too. Just to show him how insane it gets on Expert, I played BatM, not expecting to actually pass it, especially since I’m way out of practice. I was even explaining it while I was playing–“See, it’s really tempting to use star power right here, but you really shouldn’t, because this isn’t even the hard part!” Maybe it was because I was a bit more relaxed this time, but I was finally able to pass it! We both screamed joyful obscenities really loudly when I did because my “rock meter” was completely in the red (i.e., zero “health” left). Terrible score, only a three star review, but I’ll take it. Considering they’ll probably double the difficulty in the sequel, I probably can’t stay happy for too long. 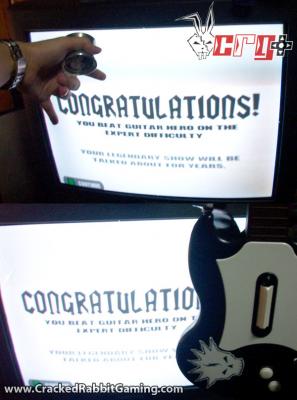 Here’s a screenshot of what happens after you win. You may have already read about it online, but don’t click if you don’t want to know: