Okay, let’s be realistic here — we’ve grown up. We all have fond memories of playing bulky gray Game Boys when we were supposed to be doing homework, or getting that sexy new Game Boy Pocket in the killer ice blue limited edition color. Maybe you still play it, maybe you sold it off when you got a GBA, or maybe it’s collecting dust in some drawer. But chances are, you still have some Game Boy cartridge cases lying around somewhere. So what are we to do with all those old cases?

I’ve been doing this for a while, so I thought I’d share it with you since I find it’s a handy little trick. This is a bit complicated, so I’ve provided step-by-step instructions. 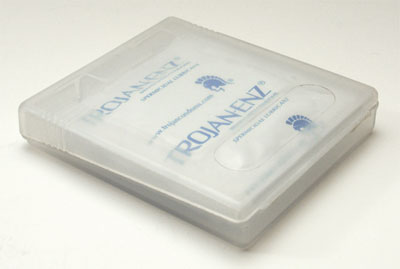 Congratulations! You’re finished! If you’re the skilled and ambitious type, you may want to go a step further to really give it some zing!

Step 2: (Optional) Apply tape or other decorations to the outside (see figure 2).

This way it’s more discreet, since Game Boy cases are clear. This mod is useful since you’re not supposed to keep condoms in your wallet because they can weaken. You also don’t want to just throw them in a backpack or other bag because they might get punctured. Now you don’t have to worry about them getting damaged. Also, if some nosy person goes through your bag, all they’ll see is some plastic case instead of a bunch of condoms. Just remember to still make sure they’re stored in a cool, dry place.

Now go out and prove to the world that gamers do get laid!

Update: This was mentioned in NGamer magazine!