That’s right, I have two of the HIGHEST ROCK BAND DRUM SCORES in the WORLD*!

Okay, this isn’t nearly as impressive as it sounds, but I’ve gotta milk this for all it’s worth, since this’ll surely last a whole…hour? (day? week?) Actually the first one is pretty good, five gold stars: 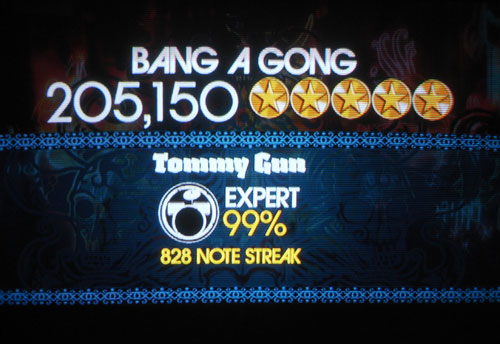 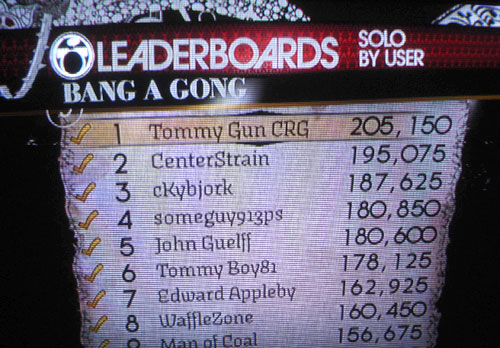 That was my fourth try, and it was so close to 100%. I missed maybe two notes (why no advanced stats?)! It’s an easy song, but there’s this part where it throws an extra snare note in, so it’s red/yellow, red/yellow. Everywhere else the second is a single yellow, so it always threw me off, and I missed a couple notes. I can definitely get 100% if I remember that. 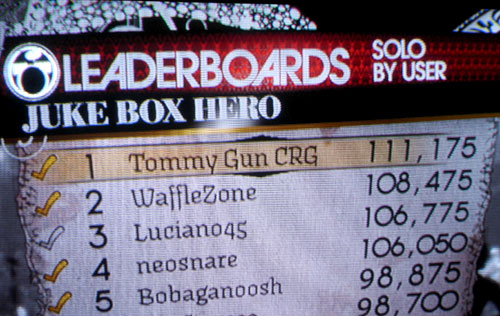 Clearly, not many people are playing these songs, because I was nowhere near flawless. Both of these songs are downloadable, so not everyone has them. And most people are probably fighting for high scores on Metallica or whatever they think is the hardest song. And only the U.S. currently has Rock Band. *cough* Also, pretty much everyone, including me, has broken drums right now. Once everyone starts modding, things will be very different.

As far as the game goes, I have a big advantage here, because I play a lot of Drummania. To be honest though, I’m only an average drummania player (or a bad one, compared to most youtube videos). Most people who bought Rock Band have never played the drums before, so they’re learning for the first time how surprisingly difficult the bass pedal is — something I learned the hard way a few years ago. The truth is, pretty much any good DM player could destroy every song in this game (more on this in a minute).

This raises an interesting question: what happens to the leaderboards when people get 100%? This is different from guitar for two reasons:

So when people get 100% on drum songs, and use all their overdrive…that should be the highest possible score. What happens to the leaderboards? Do the newest ones go to the top, or the oldest? If it’s the oldest, there should be a mad rush to 100% every song you can, first, to secure your spot.

There’s another interesting (weird?) thing about the leaderboards: you’re competing against all difficulties! You can see the checkmarks at the left side; they’re color-coded (black, bronze, silver, gold) to what difficulty it was played on. I guess Expert will always have the highest possible score? Still, not really fair, is it? Why would people playing on Easy want to know how they rank against Expert? I suppose this prevents Expert players from spamming the Easy leaderboards, but…eh.

So, back to Drummania. It’s way harder than Rock Band drums. Go watch any of the Extreme difficulty DM videos on youtube, and your head will explode. For a point of reference, here are two (the center column is the bass):

DD4 ext speed x1 — his score isn’t very good, but he’s playing on 1x, which is really hard to read, but it makes for a good notechart comparison because RB is fairly slow:

UPDATE: Just to clarify a bit, the above videos are not representative of the whole game. The stuff I play in DM is much easier, and more musical. I also don’t think RB needs to be that hard. I was simply comparing the hard DM songs to the hard RB songs, because people were saying that RB is really insane on Expert. I just wanted to show that it isn’t, and they should appreciate that while they can. ;) Compare it to a real drum solo, and you’ll also see how much further we have to go.

One last screenshot. This one is by no means a high score (#1 is around 250k?), but just more proof that Rock Band isn’t very hard — because, again, I’m not a very good drummer. This was my first time playing this song on Expert (I played it a couple times on Hard), so it was a sight-read (I believe this is in the second-to-last tier of drum songs): 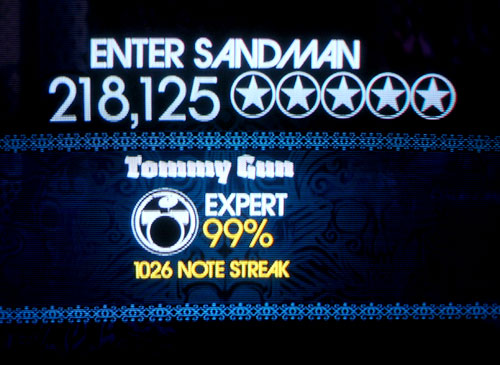 I was being cautious with the overdrive, since I didn’t know if the song would get harder, otherwise I would have had a higher score.

Right now it seems the hardware is holding a lot of people back, not the songs, but I’m sure we’ll see more insane stuff as DLC.