I have a free month of Xbox Live Gold because I just signed up, so I figured I might as well try to get the online achievements while I can. I’m not really an online gamer for the most part, but it was fun. I was trying to get the “five-in-a-row wins” achievement.

I kept running into the same few people online — because it was late, or not many people play on Hard*, or everyone’s playing Guitar.

* I would play Expert, but the songs are random, and I can’t stand playing “Don’t Fear the Reaper” with its ten billion bass notes in a row.

After playing Shoombabi I think two times, we played again and got “Should I Stay or Should I Go.” This was the final result: 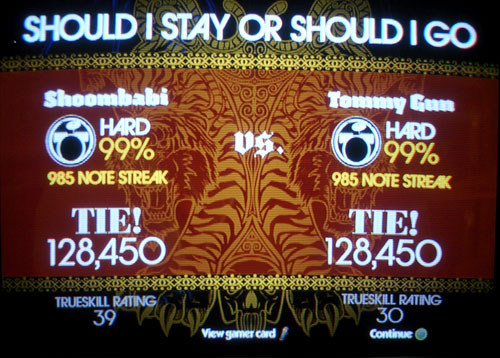 TIE! We both missed the SAME SINGLE NOTE! It wasn’t even an off-beat note or anything! It was almost at the very end of the song (the 986th note, not sure how many there are total). I know I hit it, and he said he hit it too, so what’s up? Either both our drums happened to glitch on us at the same time, or the game glitched. Crazy. Who else has gotten a tie (not counting 100% ties)?

Oh, and I did eventually get the achievement. :)

—————————
Update: Regarding the probability of this happening (if it wasn’t just a glitch):

Assuming there are exactly 1000 notes total, for the sake of simplicity, there’s a 1/1000 chance of randomly selecting a “chosen” note.

Actually, the chances of missing the same note in a scenario like that would be 1 in 1000, assuming you both intentionally missed one random note. You can’t count the first 1 in 1000. It’s one in a million that you would both miss that one exact note.

Anyway, the point is, it was very unlikely!