Elite Beat Agents is the American “sequel” to Osu! Tatakae! Ouendan. Technically it’s not a sequel, but it’s not a localization either. It’s an all new game with new songs and stories. The mechanics are almost exactly the same. It’s not a continuation of the Ouendan story since the characters are different. This debate will probably never end, so call it what you want. I call it a “sequel” (in quotes).

Since so many things are the same in EBA, much of the Ouendan FAQ is still relevant (and some of the Fan Obsession page). I have updated some of the terms and things to match EBA. Please visit the Ouendan FAQ if you need help on Spin Markers, want to know how scoring works, etc. This page is for all the new stuff in EBA, and to list all of the differences between the two games. This page contains spoilers, so use the contents links below to skip to the sections you want to read.

If you like this page, be sure to check out our other Elite Beat Agents guides!

Note: These are all covers. The original artists are listed here for reference.

Scores for Each Rank Title:

(Thanks to AquaHaute for the values)

Gameplay: Here you can see normal gameplay. Notice the new fonts and graphics. They’re a bit cleaner and easier to read.

Options screen: EBA has a bunch of new options. 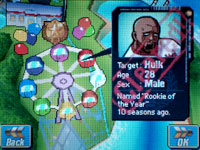 Stage Info: When you click on a stage you get more information about the target (bottom screen). It tells you who you’re helping, and some info about that person. The top screen has song info, difficulty, etc. 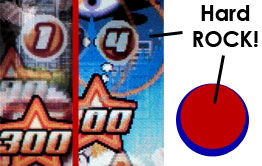 Hits Size Comparison: Here is a comparison between Hard ROCK! difficulty and the rest. It really isn’t a huge size difference when you compare them one-on-one, but when you get a bunch of hits on screen you’ll definitely notice it. The red on blue is a magnified diagram to show the difference. Red is Hard ROCK!, blue is the rest.

“Which game is better, EBA or Ouendan?”

If you’re wondering which game is better, or which you should get, it really depends. They’re both great games, and most fans will tell you to get both if you can. A huge part is the music — which songlist do you like better? Ouendan has j-rock/j-pop, EBA has popular American songs. Can you afford to import? Are you sure you’ll like the gameplay? If not, maybe you should go for EBA because it’s easier/cheaper to get, and you can trade it in later if you don’t like it (which won’t happen!). EBA has easier spinners, but the rest of the gameplay is just as tough as Ouendan. EBA has more songs — but if you don’t like many of the songs, that won’t matter (seriously though, even the “bad” songs are fun to play. Give it a chance). Do you like multiplayer? If so, get EBA. It has single card play, and it’s easier to get a second copy to do full multiplayer.

EBA also has other improvements (listed below), but they’re all things you can live without if you like the Ouendan songs better. Ask yourself those questions and then decide. If you’re really on the fence, I’d say get EBA first, and then once you’re completely addicted, import Ouendan. ;) They’re both amazing.

It’s a tough song, but you’re in luck! I created some note charts for JJF on Sweatin’, to help you memorize the difficult parts. The link is in the guides section, or just go here:

From Momentary: The “put the DS to sleep in the tutorial” easter egg has been left in. This time, when the DS is opened, Commander Kahn accuses you of sleeping on the job and orders you to get back to work. The tutorial then ends, as with Ouendan.

Note: These were taken directly from the Wikipedia article. They have removed them because wikipedia is not a guide, so I have copied them here. I did not write these, credit goes to everyone who edited them there.

IGN gave EBA an unbelieveable SEVEN awards for 2006 (in the DS category):